Wes Porter is a Slacker who attended Twin Branches for his freshman year of high school, before being expelled and transferring to Hearst High. He is unlocked and admitted to the MC's school at Level 13, after completing the quest, The Final Challenge. Wes was one of the more notable character additions to the game's reboot in September 2012 and has been moved to Surviving High Schools sister game High School Story along with love interest Autumn as of The Conned Artist, Part 1.

Wes was originally a freshman at Twin Branches High. Quarterback Nate Crawford hires Wes to find out information about a new student named Owen Harris, as Nate wanted to keep him away from his crush at the time, Zoe Davis. Wes then discovered that Owen put a guy in a wheelchair during a game of football due to the pressure from his dad. Nate later hires Wes to discover more about Zoe's boyfriend Howard DeGeest so that they will split up. Wes then discovered that Howard has returned from Kingston University to be with Zoe and not because he is on winter break.

Wes later met one of the school hipsters, Autumn who he befriends and grows feelings for. When Autumn transfers away from Twin Branches High due to being bullied by cheerleader Lindsay Vale, Wes promises to get revenge on her. When Zoe wants to know what has happened to Paige Lenx so that she can tell Owen, Wes tells Zoe that he will tell her what happened to Paige if Zoe helps him get revenge on Lindsay which Zoe agrees to. Wes tells Zoe that Paige is on lockdown at Monarch Prep. Zoe later holds an S.E.T practice test in the library although it turns into a disaster and Zoe is blamed for it making it unlikely that she will get into Kingston University. Wes offers to help her if she returns the favor which she agrees to.

Over the summer Autumn's returns to Twin Branches for a shot at an internship with the famous photographer Nikolai Tyrell. She needs to compete against 3 people including Lindsay. Wes helps her to beat the competitors and even catches Lindsay cheating. While discovering how she cheated Wes opened up about himself. Wes is revealed to have a troubled and unstable childhood. He lives in a run-down trailer, with few personal belongings, and insists that living alone beats the foster homes he's been in. Fiercely independent and resourceful, Wes saves the money he earns from schemes and intends to spend it responsibly in the future, be it on his college education or on business. Despite his tough life, he remains determined to survive and thrive. The reason why he schemes and plots is because he has felt powerless for most of his life, and manipulating others is the only way he knows how to feel safe.

Although Lindsay eventually got away with cheating, Nikolai liked the photos Autumn took better and could tell that Lindsay didn't actually take hers. Wes eventually gets revenge on Lindsay by smashing her car causing him to be expelled from Twin Branches because of this. Autumn and Wes then kiss. Wes becomes a dropout after being expelled from school. He then transfers to Hearst High.

Wes appears several times at the school the player makes as an old friend of Autumn with whom she has what she describes as history. He comes to help Autumn with insider information about Hearst High before he eventually decides to transfer after helping Autumn and her new friends win the Basketball game against Hearst High. Upon transfering he tells Autumn if she wants the kind of guy who can take her to a pep-rally and do typical high school romance things he can't be that, but if she wants the kind of guy who will lurk in the shadows and always keep her safe no matter what, he would be there for her, but it's up to the player whether or not they actually get together.

In Presumed Guilty, Wes reveals that his older brother, Matt, was 19-years-old when he stole $867 from his old boss at his auto repair job in order to help support Wes financially. Matt was convicted and was denied parole.

Wes has brown hair in a flippy shag hairstyle, a stubble, blue eyes* (See Note) and olive skin tone. He wears the Level 1 Slacker outfit. His outfit, much like the other main story characters, changes depending on the seasonal update but he is usually seen in coats or hoodies.

He was introduced as a "sketchy kind of guy" and untrustworthy by most people at Hearst except for Autumn. He is mysterious, hard to read (he likes it that way) and doesn't like talking about himself or his personal life. Because of his situation growing up, he finds it hard to find the good in people and believes everyone has a dark side, which he mentions in 12 Angry Classmates. But after transferring to the MC's school, he starts to open up more and believes he has found where he belongs. Most of the time, he only plans heists and give out information in exchange for something in return, however, if it is to help one of his friends of the MC's school, he would gladly do it for free. Described by Payton as a "mystery burrito", a mystery wrapped in an enigma, in The Wes Test and Speaking Up.

Behind his sly, devious smirk, Wes is always hiding something. Is it someone else's secret, or another cunning scheme?... Or is it that he's not quite the bad boy that everyone believes him to be? Either way, finding out may cost you!

In Quiz Bowl, Wes subtly asks Ezra for guitar lessons, indicating a desire to get better at playing it.

Matt is Wes' older brother and primary caregiver after their father lost custody of both of them. Wes loves his brother dearly and Matt is his hero. In The Guitar Job, Wes goes through a lot of trouble to find and retrieve his brother's guitar because he has a lot of fond memories of Matt teaching him to play it when they were younger. It has no monetary worth but he treasures it nonetheless. When Matt was denied parole, Wes is distraught. In Mock Trial and Presumed Guilty, Wes opens up to the MC about Matt. He believes that, because Matt stole the money to provide for Wes, his brother doesn't deserve to be in jail. Wes visits him every week. After finding out the truth about Matt's crime, Wes is visibly upset with his brother and channels these emotions into their mock trial. In Quiz Bowl, Wes says that he joined the Quiz Bowl team so he could get into college for his brother.

In Surviving High School, it was evident that Wes and Autumn liked each other since Autumn's first kiss was with Wes. In High School Story, when Autumn first introduces Wes to the MC and friends, it is clear that Wes still cares dearly for Autumn as he gets extremely angry at Max and Kara when Autumn gets hurt and only decides to fully cooperate with the MC after this happens in The Final Challenge. Julian was distrustful of Wes even before they met because Autumn was unable/refused to define her relationship with Wes. This distrust became even stronger when he believes that Wes sold them out to Max in The Mystery. Their relationship doesn't improve much even after Wes enrols into the MC's school. In The Playoffs, this was shown when Wes is comforting Autumns and he says "[Julian] may not his favourite person...". However, this must have changed somewhere down the road because in Wes vs Julian and Making The Team, they mention the fact that they play fantasy football together. In fact, it has become a tradition for them to watch it together every Saturday and both become upset when the other person skips out on it without notice, like in Wes vs Julian.

Wes and Koh have an ambiguous relationship. During their first encounter, and some encounters following this, she is seen flirting with him. She also kisses him in an attempt to get Razor's attention in Razor's Edge but her actions appear to be in good fun and she is not attracted to him. She is nicer to him than anyone else as he is rarely on the receiving end of her insults and snide comments. Their friendly relationship is most likely because they have similar lifestyles, interests and personalities. They both have had difficult childhoods, don't like talking about themselves and they share an interest in auto mechanics. Coincidentally, Wes and Koh both have part-time jobs in auto shops.

They are good friends, along with everyone else in the MC's group. Their relationship is mostly platonic but they have moments that might be considered romantic. Wes calls Sakura, "Princess", and in Innovation Challenge, if PaytonDatin' wins, Payton offers to set up Sakura and Wes on a date and surprisingly, (at the time) they both agree to it. In Greek Holiday, Sakura falls on top of Wes when she saves him from a falling statue but quickly gets off him after seeing Nishan. In Quiz Bowl, Wes goes to Sakura's house to prove to her that he knows all of his topics. After she quizzes him, she comforts him when he starts feeling unsure of himself. They are about to kiss when Nishan walks in and interrupts them.

In Heist School Story, Wes assigned Mia to be on Team Eagle-Eye. Mia thinks Wes is weird and often asks him, "Are you always this weird?" They often have conflicting opinions, often due to their differing living and family situations. This was the main cause of their argument in Mock Trial and Presumed Guilty. In the end, Mia learns to sympathise with other people and Wes learns more about the reasons behind his brother's actions. They become good friends after this and are seen teasing each other from time to time.

They are often seen hanging out together. In The Pecking Order, they get into a fight over a comment on the My School Story blog but soon make up and go back to being friends. 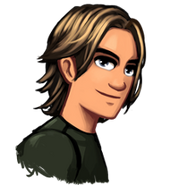 Wes' Appearance in Surviving High School
Add a photo to this gallery
Retrieved from "https://hss.fandom.com/wiki/Wes?oldid=51295"
Community content is available under CC-BY-SA unless otherwise noted.