Sakura Watanabe is Gamer who attended Hearst High. She is unlocked and admitted to the MC's school at Level 14, in the quest, The Gamer Girl.

It's revealed early on, when Nishan transfers, he was good friends with Sakura at Hearst High. When you approach Sakura about transferring to your school you find out that she was hurt when Nishan not only left her alone at Hearst but left her with a lot of unfinished projects they were working on together, too, which made Sakura quite angry at Nishan.

While trying to recruit Sakura you find out from Nishan that she has always struggled with her grades in art class as this is the one subject she can't play games to succeed in.

Sakura has pink hair in a curly half-up-half-down hairstyle, accessorized with a black clip, brown eyes, and dark olive tone. She wears the Level 10 Gamer Outfit with slight color variations. Unlike most of the other main story characters, her outfit doesn't change that often in seasonal updates.

Sakura is shown to be fierce, fiery, and short-tempered. She can also be stubborn and doesn't seem to be romantic. She can be over-competitive, which is fitting, as she is a Gamer.

Sharp, calculating, and competitive, Sakura applies her pro-gamer attitude and strategic genius to every part of life. And while her analytical approach may strike some as cold, make no mistake... Sakura is one of the best Player 2's a friend could ask for!

Sakura was Nishan's only friend when they were both students at Hearst. Sakura south out Nishan after having some laptop troubles before an important League of Clanscraft tournament. They ended up having a lot in common so they remained friends even after she found out he was the one that created the virus that infected her laptop. Nishan seems to understand Sakura the best. In The Games We Play, he says that Sakura is fiercely independent and hates when people fight her battles for her. He used to be cowardly and slightly afraid of Sakura. When he first transferred, he was afraid of how Sakura would react so he didn't tell her. This caused a rift in their friendship that was only fixed after a little help from the MC and the rest of the group. However, after losing her once, he realizes that he needs to stick by her no matter what. In The Games We Play, he leaves the CarnageKings after Sakura was kicked out. It has also been hinted that Nishan likes Sakura more than a friend and becomes evidently flustered whenever someone teases him about this. This happens in The Games We Play, when the CarnageKings say that he should give up on dating Sakura and in Mission Nerdpossible, when Max taunts him by saying that "that little Nerd-Girl you're always staring at" wouldn't want to hang out with a traitor. Sometimes, he blurts out things and takes them out of their original context like how he wouldn't mind being alone with her or that she's beautiful etc. Sakura seems to reciprocate these feelings as she became jealous of Kara when she started pursuing Nishan.

They are good friends, along with everyone else in the MC's group. Their relationship is mostly platonic but they have moments that might be considered romantic. Wes calls Sakura, "Princess", and in Innovation Challenge, if PaytonDatin' wins, Payton offers to set up Sakura and Wes on a date and surprisingly, (at the time) they both agree to it. In Greek Holiday, Sakura falls on top of Wes when she saves him from a falling statue but quickly gets off him after seeing Nishan. In Quiz Bowl, Wes goes to Sakura's house to prove to her that he knows all of his topics. After she quizzes him, she comforts him when he starts feeling unsure of himself. They are about to kiss when Nishan walks in and interrupts them. 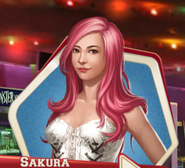