The Nerd Hangout is unlocked at the beginning of the game and can be found in the Hangouts section of the store. It is one of the nine hangouts that are unlocked with a base character type. In this case, the Nerd is one of the classmates you unlock when starting the game.

Long Description: Chemistry sets, video games, and radio-controlled robots are just a few of the geeky delights hidden within the Nerd Hangout! In fact, this hangout has been proven to provide an optimum scholastic experience for all your brainy BFFs!

The Nerd Hangout can be bought from the Store for 500 coins and takes 30 seconds to build. Its capacity is two students and holds a maximum of 3,500 coins.

At Level 10 the Nerd Hangout can be upgraded for 60,000 coins and takes 1 day to complete. It now holds four students and has a maximum of 9,500 coins.

The classmate types that can be placed in the Nerd Hangout are as follows: 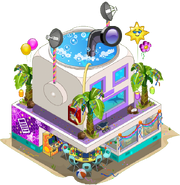 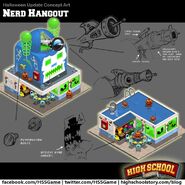 Halloween Nerd Hangout sketches
Add a photo to this gallery
Retrieved from "https://hss.fandom.com/wiki/Nerd_Hangout?oldid=51115"
Community content is available under CC-BY-SA unless otherwise noted.